The National Labour Inspectorate celebrates its 100th anniversary and discusses the opportunities and challenges for the labour world in the 4.0 era 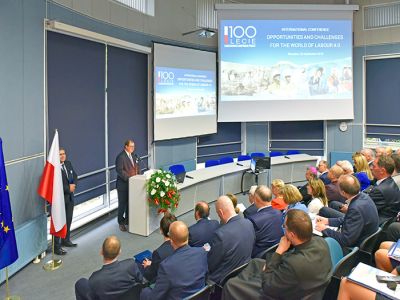 Inelo experts also took part in the event, presenting during breaks TachoScanControl software, which is also used by NLI inspectors.

The conference was divided into two thematic blocks, which touched upon the role of modern technologies in the context of work safety, as well as human issues in a constantly changing work environment. It was an opportunity for everyone gathered to discuss the challenges presented by the need of labour protection in the 4.0 era, so that, the role of a man is not overlooked when entering the industry of the future

One of many speakers, Iwona Hadacz, Deputy Director of the Human Resources and Training Department of the Chief Labour Inspectorate, read a letter from the Speaker of the Sejm, emphasizing the multi-generational activities that lead to the National Labour Inspectorate being today a modern office that has an undeniable impact on the development of the country. The innovative nature is also evidenced by the fact that inspectors, for a long time now, have been using advanced software for controlling drivers’ work and settling working time records – TachoScan Control, which allows, among others, calculate the remuneration due to the employee based on data from smart tachographs. The widely discussed topic of the 4.0 era was also an opportunity to talk to our experts – Mateusz Włoch and Michał Franczyk about their view of the changes taking place in the transport, forwarding and logistic sector. It cannot be denied that the 4.0 era will have an impact on the way labour inspectorates work, and the current activities of the National Labour Inspectorate confirm the readiness to adapt to the upcoming changes.

For more information about the event, visit https://www.pip.gov.pl/pl/wiadomosci/105057,miedzynarodowa-konferencja-we-wroclawiu.html.
We also encourage you to visit the special anniversary website describing 100 years of NLI’s activity https://100-lecie.pip.gov.pl/.